Available to purchase from: Amazon Books
And from the RIVER FRIEND WEBSITE 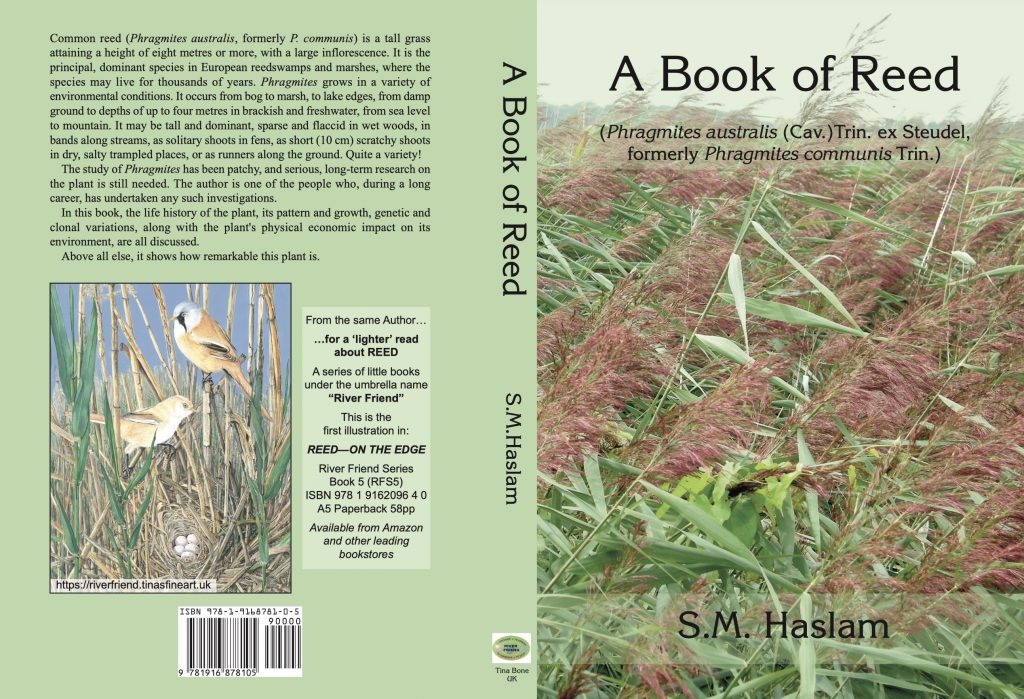 Common reed (Phragmites australis, formerly P. communis) is a tall grass attaining a height of eight metres or more, with a large inflorescence. It is the principal, dominant species in European reedswamps and marshes, where the species may live for thousands of years. Phragmites grows in a variety of environmental conditions. It occurs from bog to marsh, to lake edges, from damp ground to depths of up to four metres in brackish and freshwater, from sea level to mountain. It may be tall and dominant, sparse and flaccid in wet woods, in bands along streams, as solitary shoots in fens, as short (10 cm) scratchy shoots in dry, salty trampled places, or as runners along the ground. Quite a variety!
The study of Phragmites has been patchy, and serious, long-term research on the plant is still needed. The author is one of the people who, during a long career, has undertaken any such investigations.
In this book, the life history of the plant, its pattern and growth, genetic and clonal variations, along with the plant's physical economic impact on its environment, are all discussed.
Above all else, it shows how remarkable this plant is.

Preface
Phragmites australis is the dominant species in reedbeds and occurs on every continent except Antarctica and may be one of the most wide-ranging of all flowering plants. Phragmites grows under a variety of environmental conditions ranging from salt to fresh water, which probably has led to its ubiquitous occurrence around the globe.
Now as a result of a great deal of talk about the value of reedbeds (largely prompted by EU Directives) mostly in terms of their importance as a habitat for other species, some rehabilitation, creation or conservation is being undertaken. What has been lacking is sufficient, serious and long-term research on the plant itself.
There is a need for Universities and research organisations to appoint aquatic or wetland ecologists whenever possible. If, with a preponderance of botanists and low disturbance, we can get the vegetation right, the proper fauna will generally follow: while the reverse does not apply.
Can future research be done properly and how can further understanding be gained? If this is not, this book could be authoritative for a century when, properly, it should be overtaken by a new book in perhaps a quarter of that time.
I apologise to those whose work is omitted or barely referred to. Some cover the same ground (with publications mostly referred to by name); some add to knowledge in different parts of the globe, confirming general behaviour as the same, but not otherwise increasing knowledge; some describe what will be the understanding of how chemical processes determine behaviour, but the research is still ongoing; and conclusions are missing.
To provide evidence for Phragmites behaviour often requires complex tables which the general reader does not need or want. Tables are therefore gathered at the end of chapters, where they can be studied if desired.
S.M.H.